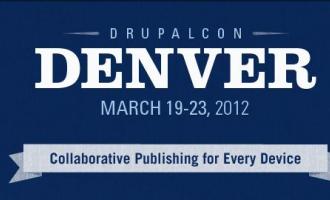 It seems like Promet just got done exploring some new ground at Sandcamp in San Diego and already Drupalcon Denver is right around the corner.  Promet is proud to announce that it will once again be sponsoring Drupalcon Denver.  DrupalCon is an excellent place to meet like-minded Drupal users and developers, and we hope to see you there.

DrupalCon Denver has its usual lineup of impressive speakers including - Mitchel Baker of the Mozilla Foundation, Luke Wroblewski, Sam Boyer, Kyle Browning, and of course Dries, just to name a few.
Read the full list of speakers here.

We'll be sporting the DrupalCon hashtag (#Drupalcon) on Twitter to get things in motion for the event.  Don't forget to do the same and hit up @prometsource with a tweet or two :)

Promet's President - Andy Kucharski is set to present "Taxi Cab Confessions" a case study on connecting Drupal as a dispatch app to iPad devices in Taxis.
You can catch Andy on Thursday of DrupalCon at 2:15.

A brief summary of the presentation:

Promet Source has built the iPad app for Green Cab Madison to help them take advantage of mobile technology and optimize their business.

We will describe the module used in setting this system up, as well as discuss many challenges that arose during this project and how we have solved them.

We will also discuss the tool selection for programming the iPads, and the pros and cons of native and hybrid solutions.