The government uses Drupal to power some of the most highly trafficked sites on the web. Aside from the popular example of WhiteHouse.gov, a list of sites that demand scalability and security rely on Drupal to connect with users. Now that Drupal 8 has been out for a few years, should government websites stand pat with a Drupal 7 implementation? We know that Drupal 6 sites have a more immediate need to migrate to a newer version of Drupal, but here's why you should consider green-lighting Drupal 8 for a government site that needs to be fast, secure and perform to expectation.

Check out some of Promet's other stories on using Drupal for government websites: 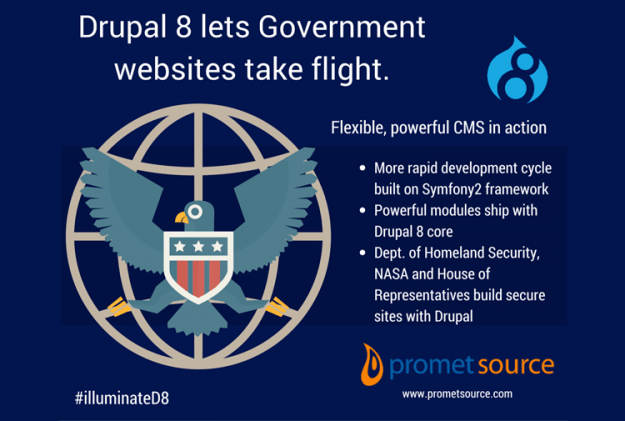 The audience for government websites holds them to a high degree of scrutiny. This is to be expected for a web portal that will represent taxpayers' hard-earned dollars at work. Landing on the right development team, the essential requirements and the most powerful CMS for the website are crucial in the lead up to development. Take these five points as proof that Drupal has the power and flexibility to meet the needs of government websites:

Security is a common and legitimate concern for site owners. How does Drupal’s inherent security stack up versus a licensed content management system (CMS)?

There is a kernel of truth to the notion that Drupal talent is hard to find. Not every web developer has worked with Drupal. Once a Drupal developer is found, is it difficult to secure him or her for a lengthy project? Drupal is based on PHP, the most common and popular scripting language that supports not only the two of the most popular open source CMS among top sites (Wordpress and Drupal), but also the likes of Facebook. More and more Drupal developers are coming online every day to meet the demand. According to a Stack Overflow survey  from 2018, about 1 in 3 (31.4%) of professional developers use PHP; ranking it in the top 10 used languages by professional developers.

Typically the technical risk in WCMS implementations comes from long development cycles, which are difficult to test and implement integrations with lots of customization to the CMS. Drupal 8 eases the risk of implementation by improving on the Drupal 7 experience in these areas:

Drupal can be fine-tuned to play nice with almost any proprietary CRM or SaaS tool. Right now there’s also a lot of focus on the potential for decoupled Drupal sites that work great with any API you can throw at them. If a contributed module doesn’t already exist then you can author your own and contribute back to the community.

Getting enough time for the investment is not a concern with Drupal. Drupal updates always support the previous release version (in this case Drupal 7 will be around for a while) and a site built with Drupal 8 can withstand deprecation.

Now you can see why so many .gov sites are made with Drupal. Drupal 8 has changed many things (for the better!) around content creation and development workflows but it still delivers an open source framework that is fast and secure. Building secure systems that have earned the trust of the United States, Australian, and German governments, along with a host of state- and local-level governments, is a natural fit for the Drupal CMS. Recently the Israeli government decided to end their contract with Microsoft and move towards open source systems like Drupal.

Have an idea for a Drupal project? Let us know if we can illuminate your project's requirements and set it on the path to results with Drupal!