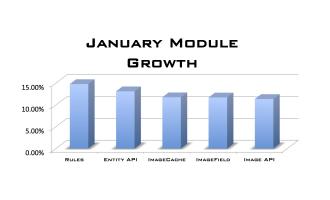 Last month we started documenting usage trends among Drupal core and Drupal modules (taking data from Drupal.org). We’ve been paying particular attention to the top 25 modules currently in use and seeing how their deployment compares and contrasts with one another.

During the month of December, 2012, the online world was consumed with site scalability for the holidays and online retail numbers. And by the numbers, it seemed that development and deployment of Drupal sites and functionality was on holiday in the Caribbean or the French Alps. We saw across the board stagnation or decline in the usage of ALL top 25 modules.

During December, leading the stagnation were the following:

Among the least anemic of the top 25 modules during December were:

This brings us to 2013 and we want to begin by saying HAPPY NEW YEAR DRUPAL! It looks like the community is back on track and we want to give props to the big movers.  Leading the pack amongst the big gainers in January are: