Publish a module, theme, or distribution on Drupal.org

There are several detailed steps required to publish a new project on Drupal.org. But, the investment is well worth your time. This article will cover:

Providing developers with an ecosystem for sharing new ideas, while simultaneously assuring customers that code has been tested for stability and security, is a constant challenge in any open source realm, and Drupal is no exception.

Prior to March 2017, publishing a project on Drupal.org as a relative newcomer would easily mean a year-long wait (or even indefinite). Developers could create a sandbox module, but converting it to an "official" module was a big challenge. The creator of the sandbox needed to get the module reviewed and "approved". Once approved, they would not need to go through the process again. But, it was a long process, and many developers got frustrated by this inefficient "approval" process. The only way to speed it up was to review other projects (resulting in a review bonus), but this was still very time consuming. This process worked when Drupal was still small, but the community has grown (nearly 4,000 people have contributed to Drupal 8 core alone!), and there are simply not enough volunteers to review and approve / disapprove new modules, themes, or distributions.

However, even though anyone may create a Full project, Full projects are not automatically covered by the Drupal Security Team, and users are encouraged to follow Drupal.org best practices prior to promoting their project to Full status, regardless of Security Team review.

The policy revamp debated above resulted in a Community Initiative Proposal, which is aiming to enforce the following high-level policies:

Why hosting your project on Drupal.org is recommended

While there are many other places where you may host your project (GitHub, BitBucket, personal server, etc.), the Drupal community strongly encourages developers to host their projects on Drupa.org for the following reasons, as explained on Drupal.org:

Sandbox projects and Full projects share some key basic features, such as both having a project page, a Git repository, an issue queue, and the ability to appoint co-maintainers.

But, there are some distinct differences between a Sandbox and a Full project, meant to steer developers toward trustworthy and stable projects. The following table summarizes some of these differences.

3-Step Guide to Publishing Your Project on Drupal.org

You may then proceed with creating a Sandbox project. 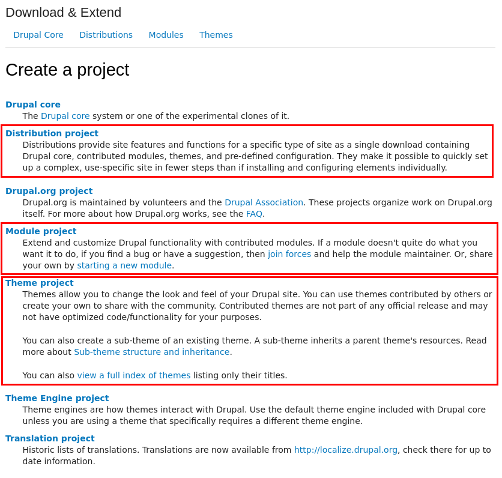 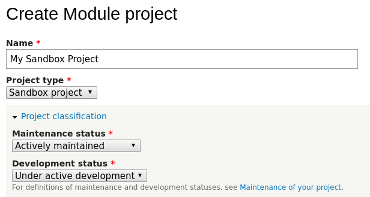 Click the Save button. Drupal creates and loads a page for your new project. 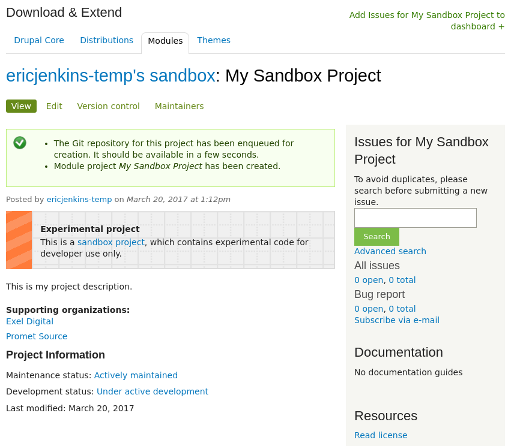 Click the Version control tab near the top of the new project page for instructions on how to start committing code to your sandbox repository. 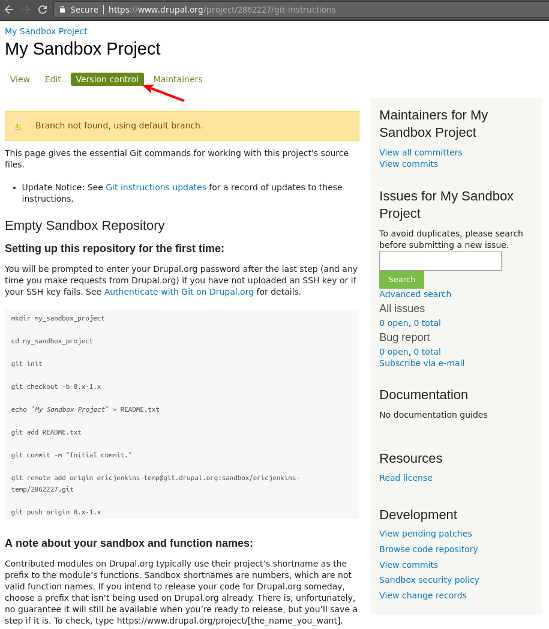 Your project will now appear on your Your Projects page. If desired, grant access to other users by editing the Maintainers section.

Even though Security Team approval is not required, Developers should refrain from promoting their projects until they have been thoroughly tested, proper documentation has been created, and possible security holes have been considered.

When you are ready to promote your project to Full status: 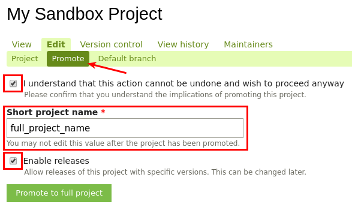 Re-clone your project in Git, or update your remote URL in your existing local code repo, to be able to continue updating your project

Applying for permission to opt into security advisory coverage

Drupal.org provides detailed instructions for applying for this permission, the most notable steps of which I have excerpted here:

Reviewers will examine your code and may provide feedback and concerns about your project (See the Drupal.org article: What to Expect). This process can take weeks or even months, but it can be accelerated by participating in the Review bonus program.

Once this process is complete, you will be able to promote your project to Secured status, and you will finally have that beautiful "Shield" icon alongside your stable release indicating that your project is officially covered by Drupal's Security Advisory Policy.

Contributing new projects to Drupal.org is now easier and will allow more developers to make use of all the possibilities Drupal.org offers, like releases, drush download, etc.  But, don't give up on security coverage! The "Opt into security team coverage" is a proof of quality for your contributed module, theme, or distribution. It makes people more confident to use your work. The validation process will probably remain hard and slow, but it is worth it. Reviews and tests improve the quality of contributions all the time!

The mission of any Open Source platform is for people to share code and ideas among those in its community, and Drupal is no exception! Publishing your project, and eventually opting into security coverage, will not only strengthen Drupal's offerings, but it will contribute to your own reputation as a relevant and meaningful contributor to Drupal's mission. Happy coding!

References and Special Thanks